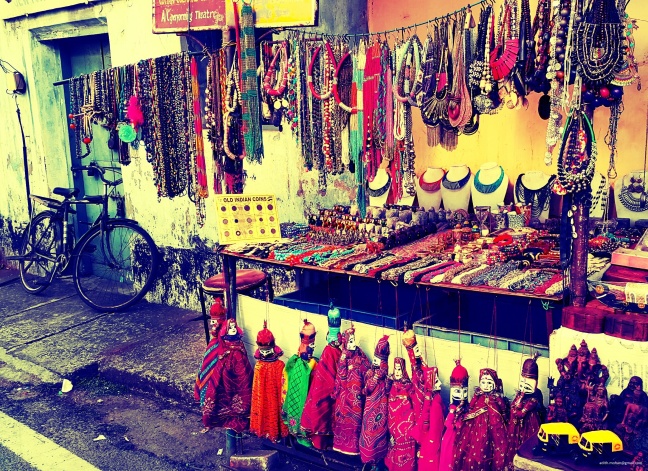 Mattancherry is a frequent tourist destination popping up in many South Indian movies. Resting ashore the Arabian backwaters, just 9 Kms from the Cochin city, Mattancherry is reachable by road or boat. The boat trip is a different experience to those who don’t do it often and it takes 30 minutes. The usual scenes on the celluloid are majorly the palace, churches and streets in and around Mattancherry. Lining these streets are a whole set of shops selling trinkets and sweets to boutiques and antiques. These are quite a view and here’s sharing a few colourful ones off the streets that really seemed to be eye candy.

New Delhi, Thursday July 31st 2015 …There are good days… and there are bad days… and then there are those awesomely bad days when you question your existence. On such a bad day, I kept my formal composure with difficulty, packed my laptop at work and was on my way back to my room; standing by the metro window, watching the fading shades of dusk and the swarming crowd in each station.. I felt a primal need for change… laptops… well lit office rooms… Metro trains…. Busy brains… Free coffee (when you’re unable to enjoy it, even free things are of no use…)… method actors in formal wear… ricocheting project schedules…. Well, that’s one list that’s sure to go for some time.. at least the list was long enough to make a decision to get out and go somewhere. It was 2 hour travel from office to my room and this helped my aching head to confirm my decision. I reached my room, to find an equally frustrated colleague. Rohit was back from a hard day at work too…. We searched for 10 minutes online for possible destinations from Delhi. Manali hit the screen all beautiful, green, bright, snowy, Rohtang… and the decision was made in 2 minutes. We booked the bus tickets in 5 minutes, did some basic research..  July was not the right time to be in Manali, it would be rainy and there’s landslide threat… pushing those thoughts under the pillow, we slept off. The next day passed in a haze… By 8 PM we were aboard our bus to Manali…

It was around 6 in the morning when I was woken up by the honking of some vehicle passing by. The view outside the window was beautiful. We were traveling by the banks of an enraged Beas river, gushing over the rocky bed. The opposite bank was covered in lush green trees. There were houses and shacks between the trees. This visual treat continued for the next 3 hours while we were traveling through the Kullu Valley till we reached Manali.

Once the bus stopped, we were excited enough to be the first few to jump out of the bus. The excitement or maybe the dizziness, whichever it was, took the better of us… We had jumped out into a pretty cold Manali, by cold, meaning it was cold, breezy, drizzling, fog still hanging around, and we were in our summer wear…. Coming from the scorching summer hitting 45 degrees in Delhi, this was quite something. Since it was not a planned trip our bags were less packed for the cold climate, still, the excitement drove us. We freshened up and did a bit of enquiry locally. We found that the permits for Rohtang pass were available only for the next day. This was a bummer, Rohtang was the “highlight to be” of our trip. Rohtang (Pile of corpses) is a mountain pass 50 Kms from Manali and at an elevation of 13050ft connecting the Kullu valley with Lahaul and Spiti valleys, it opens only from May to November due to extreme weather conditions in other months. It seemed like it wouldn’t be the perfect trip after all. We would now have to take a rented shared vehicle to see Rohtang. This was not what we wanted. A shared ride would mean they’ll be taking us in least time and would not allow to stop in between. We located a bike store nearby, and got a bike for local site-seeing. While we were on this, a guy from the bike store told us he could get a permit on the same day, he also warned us that the weather condition was not suitable for the past few days, roads were not safe due to fog and rain. Once again excitement beat us there. We paid him the permit charges and waited fingers crossed. He returned with the permit in an hour. It was 2 PM by now and it was a 50 Km ride. It didn’t seem difficult. Rohit, being a motorbike freak, getting to ride a bike after long that too to Rohtang was like Christmas coming early. Firing life to the pistons we set on the road.

The climate was cool and we were adjusted to it by now. We rode on capturing the views in eyes and lenses all along the way. We stopped at Solang valley 14 Kms from Manali and 5 Km off route to Rohtang. This place usually has adventure sports like paragliding, skiing, … when the weather allowed it. It was closed due to bad weather today, only a ropeway trip to the hilltop was open. We took it, spent some time on the hilltop enjoying the view of the hills and valley below and continued our journey. It had started raining by this time. We started climbing the hairpins. The view was getting more beautiful.

The more we climbed we were getting a more vivid view of the valley and paths left behind. The whole green landscape strewn with rocky hurdles everywhere, rogue streams making their own way through the hills… We also spotted some horses on the way, grazing on their own by the stream, this was a rare site. They looked like a team rather than a herd; we didn’t risk going near. We took some pics and went along.

We stopped at a place called Marhi on the way where we had to buy hand gloves to resist the cold. The thin jackets we wore had only the effect of toffee wrappers in the cold. By evening it was getting really cold. Temperature was dropping and the rain was getting heavier, wind got harder making the cold painful to the skin. To add as an icing to the situation the road started getting difficult too. Fog started settling and we were not able to see past a few meters ahead. 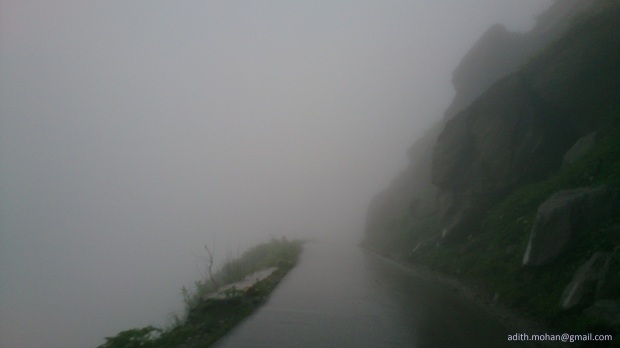 Our bike was now going through water, mud and rocks too splashing dirt over us as well. A few times the bike tyre sank into the gutters filled with mud. We lifted the bike out and rode on. After almost 5 hours from start, we reached Rohtang, our destination. Atop the mountain, we stopped our bike and got off. We were at the side of a small hilltop meadow. We started walking towards the edge of the meadow where a rock was jutting into the valley below.

13050 feet high… 5 degrees and windy..  Drenched to the bones, cold to the nerves, covered in dirt… Fog, rain and wind fighting to get us first.. Standing on the edge of a rock looking over the valley strewn below,..  I was falling in love with the one thing I’d missed for long… Peace…  Not a sound except maybe the distant rumble of a motorcycle climbing up to reach the heaven I was in.. But before whoever it was could reach…  I wanted to ebb in every ounce of pristine beauty laid out before me..  A moment of solitude to worship the majestic snowy peaks and forget the expendable luxuries.. I couldn’t remember the last time I was sad..
All I wanted was to pack this heaven and take it back with me… Breathing in the icy air.. I wasn’t worried I’d fall sick the next day or that the rain could leave me bedridden…  At that point it was all about standing there, before the peaks where the God’s would build their homes..  Rivers fed by glacier flowing below me.. Waterfalls escaping the bosom of the mountain sides plunging to the embrace of the valley below.. Greenery on the mountain slopes charmed by the mist… The roads leading down to the valley forming snake like patterns by the slopes… Clouds hanging low and threatening to shower down more anytime..

The time spent there was little as we had to get to our next pit stop. We were worn out through the journey, but it was worth every single second to just be there. Go there.. Somewhere far.. Fall in love with yourself.. With peace… Take a little bit of Heaven back with you, within you. Then to the next one… Even a bastion of pride will feel humble in the abode of the Gods.